In Ancient Greece, where no weight categories existed, and boxers fought until one of the opponents acknowledged defeat by submitting or was beaten so severely that he couldn't continue or die, leather thongs were wound around the hands and wrists. The boxers generally fought with a left leg stance while holding the left arm semi-extended over it as a guard and for jabbing. The right arm was commonly held back, cocked, and ready to deliver that elusive straight knockout blow to the opponent's head.

A form of Boxing known as Pyx (meaning 'with clenched fist') was introduced to the Olympics in 688 BCE, where opponents were only allowed to punch. Other forms of attack such as grappling, biting, and gouging was prohibited though it is hotly debated in the academic world if kicking was allowed.

The object was to either knock out the opponent or forced him to submit, which was indicated with a raised index finger. The fight would continue until submission or knock out was achieved; in this particularly vicious version of the sport, there were no rounds, and participants could keep punching even if their opponent were knocked to the floor.

A soft dirt pit known as a skamma was used to fight in, and a referee oversaw the battle, carrying a switch to whip any fighter that broke the rules or stepped out of line. While these contests were brutal affairs, a fighter would still need high levels of training, skill, and courage to make it in the boxing scene of ancient Greece.

These contests seem to have been akin to bare-knuckle Boxing though, in place of boxing gloves, their wrists and knuckles would often be wrapped in straps known as himantes made from ox hide and were designed to protect the boxer's hands.

After the fourth century BCE, these were replaced with so-called sharp thongs that served the same purpose and consisted of a thick strip of leather. Different fighters seemed to use these straps in different ways, some covering much of the hands while others just used them as support for the wrist. 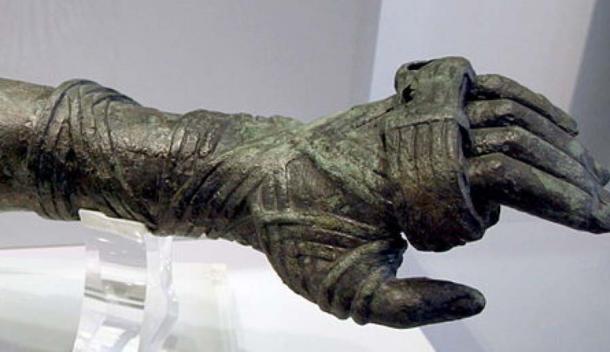 While they were probably used mainly for protecting the boxer's hand when covering the knuckle, the leather would also cut into an opponent when he was hit, causing far more damage than if they were hit from a fighter using the himantes, sometimes also called softer thongs. It is interesting to note that as with most sporting contests in ancient Greece, apart from these straps, participants of Pyx would be completely naked.

Boxing later found a firm foothold in Rome, where hard leather hand thongs were imbedded with sharp metal studs to make the 'cestus'. This brought Boxing out of the lowly realms of blood sports and turned it into a death match of the amphitheaters.

Highly-trained slaves were sometimes pitted against one another in circles marking the sand, the origin of the term 'boxing ring.' In 393 AD, at the height of the Roman gladiatorial period, Boxing regularly resulted in competitors' jaws hanging off and other such brutalities, so the sport was abolished in different areas across Europe.

Boxing in ancient Rome was known as Pugilatus (from which we derive the modern word pugilism) and was even more ruthless than the version of the sport that the Greeks participated in. The leather straps around the hands could be utilized but were often replaced by what were effectively leather knuckledusters known as caestus that had metal inserted into them to cause maximum damage to an opponent.

In many ways, the caestus was more like a knife than a boxing glove as it could stab and rupture a fighter. In his poem, the Aeneid, Virgil references their brutal nature by mentioning that when a Sicilian fighter called Entellus wanted to wear a pair previously worn by his brother, they were still "stained with blood and splattered brains".

These metal-laden gloves were not necessarily compulsory; however, as can be seen from the same poem when Entellus' opponent, Dares of Troy, refused to fight in them opting instead for lighter, padded gloves (depicted in the image below). 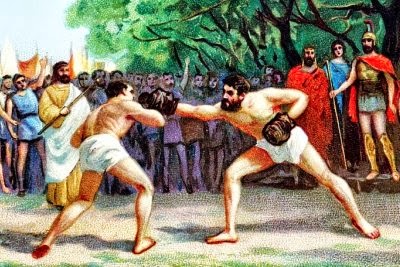 As well as being a sport and a gladiatorial contest, it was also seen as a training method for soldiers in the Roman army. However, safety equipment would have been used in this case to prevent injury during training.

The boxing scene held an essential role in Roman culture until, in around 400 CE, Emperor Theodoric the Great banned it outright. As a Christian, he disapproved of the deaths and disfigurements it could cause, and of its use as a form of violent entertainment.

This is the absolute beginning of Boxing. Be sure to stay tuned, as we advance through the ages and build out a timeline of how Boxing has become what it is today.